I've been back since Sunday, and I'm still not recovered. That, and two days of severe computer problems after my return, combined by network outages due to the storm, make up my excuse for not posting earlier. Heck, I'd originally planned to post each evening, but I didn't have internet down there.

Be that as it may, I am now going to tell you all about the Surrender of Secession re-enactment, put on by the Southeast Coalition of Authentic Reenactors with some participation by the Authentic Campaigners crowd. Both of these organizations are deadly serious about getting it right, and reenactors actually had to have an invitation to participate in the weekend at Westville. I would not have missed this for the world, for just this reason: It was an unparallelled opportunity to learn.

I originally understood that they were to 'go live' first thing Thursday morning, so I made my plans to be there. As it turns out, only a smattering of reenactors were already onsite. The good news, though, is there weren't many tourists there, either, so I was able to shoot a lot of exteriors without people in modern garb wandering through.

One of the first things I noticed was that various female reenactors' skirts were of widely varying lengths. I wondered if that was a class or age-related thing, and so I asked this lady. 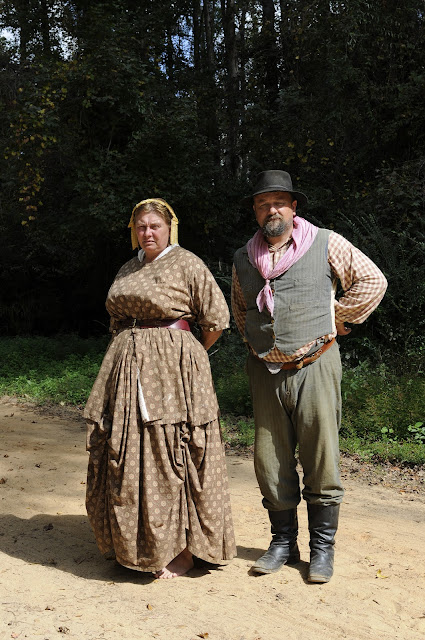 "We're poor," she told me. Their clothes were by this time all old or hand-me-downs.

I had not thought about the practical effects of that, and would not likely have read it or picked it up from looking at old photographs, either. So I thought about what it would mean for an adolescent girl who'd grown a few inches during the war years but could not afford new clothes, and now her skirts are too short. Her ankles show, and maybe even some leg. I suppose that a woman could sew in panels to let out the waist and shoulders, or she could let out pleats and gathers, but once she started sewing bands of fabric around the hem (assuming she had any) to lengthen her skirts, she'd be looking like a walking patchwork quilt.

If you look closely, you can see this woman's bare feet peeking out from under her skirt. And later, I overheard a mother explaining to her child that no, she could not wear her boots to go to town, because "we have to save those for special occasions." So I thought about the embarassment, the shame, even, of going about barefoot, of how it would feel when you saw people spot your dirty, bare feet sticking out. Or when they looked down at your children's feet, black with dirt. Or even of the embarrassment you might feel on someone else's behalf if, say, you had shoes, but the fellow you met on the sidewalk didn't.

In my next post, I'll tell you about John and Sassy, and what I learned about mule-driving.