Surrender of Secession, Day One

It's Westville, Day Two for me, but for the reenactors it's opening day.

Today's the day the Army moves in to establish martial law. These guys really did this thing up right. From the moment the park gates opened, every reenactor was in role and there was something going on every minute of the day. If you are used to those "reenactments" where guys stand around tables with their gear to show you, then you really have to experience the SouthEast Coalition performances--because that's exactly what they are. Being at Westville this day was like walking around on stage in the middle of the play. If you happened along in the middle of something, they would deliver their lines to you: I dropped something, and a Yankee soldier, picking it up for me, said, "See, ma'am, we're not all bad."

After the orders were read to the townspeople, the soldiers went over to the tavern to wet their whistles, and a mini-riot broke out. In reprisal, one of the soldiers took a hatchet to a barrel of whiskey. Over the cries of the town drunk ("Not the whiskey!") I heard a citizen heckling, "Ain't you took enough from us already?" 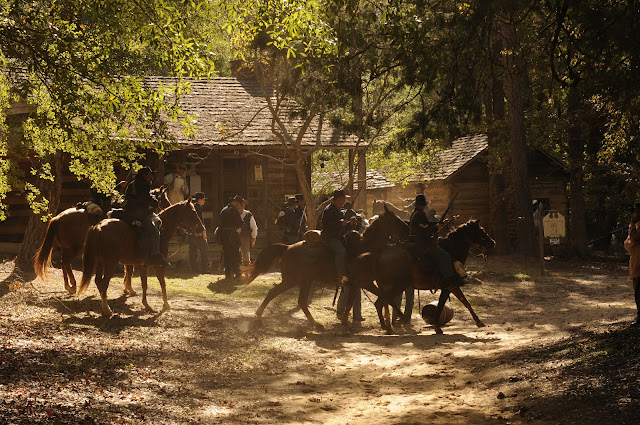 Southern resentments were plain. Later in the morning, the muleskinners gave the newly-arrived carpetbaggers a ride over to the boarding house. I happened by and overheard one of the men on the wagon muttering, "Look at him goin' in the front door!" And as the townspeople gathered at the courthouse in the afternoon to take the oath, one old rebel lay out front on the lawn under a shade tree and heckled them for knuckling under.

Yet another resident of the town cautioned me against being out alone, as, he said, "There are Yankees about. And it is widely rumored that they consort with the devil and eat small children." Neither of which I saw as presenting much risk to a 60-year-old writer, but hey.